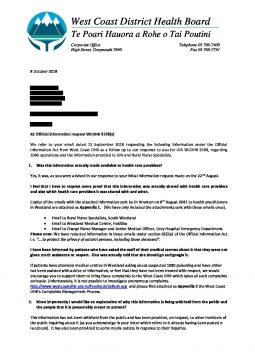 RE Official information request WCDHB 9198(a)

Regarding 1080 operations and the information provided to GPs and Rural Nurse Specialists.

1. Was this information actually made available to health care providers?  I have been informed by patients who have asked the staff of their medical centres about it that they were not given much assistance or respect. One was actually told that she should go and google it.

2. More importantly I would like an explanation of why this information is being withheld from the public and the people that it is presumably meant to protect?

3. How are concerned patients who have been exposed to a known hazardous substance that kills people meant to deal with these concerns when the recommended protocols are concealed from them?

4. How are they to avail themselves of appropriate investigations and therapy when the response to their concerns is inadequate and perhaps inappropriate?

5. How is concealing essential information from concerned patients supposed to be justified as promoting
public health?

6. How are concerned patients supposed to know that the specific test for 1080 that their Medical Officer of Health publicly stated would cost them hundreds of dollars is now being funded by the health system?

7. How will concerned patients know about other investigations that are well known to indicate possible poisoning by 1080 when these tests are not even mentioned in the information that was allegedly provided to some health care professionals? Some of these tests are well documented in the literature produced by Dr Charles Eason and I would have expected that Medical Officers of Health would be familiar with this literature. Perhaps they are not?